Learning from the good, the average and the ugly

I’ve written before about how great copy should live everywhere. If you’re an indie developer trying to make your mark on the App Store, ensuring that the copy inside and around your app is written to win over users can only be a good thing. Not convinced? Here are a few reasons why:

It doesn’t have to be hard. If you’ve ever stood in front of a stranger and explained how your app works to the point where they’re smiling, you’ve pretty much nailed it already. Write whatever you said down and you’ve got a solid starting point.

You’ll delight the nerds. That’s right, the people (like me) who are prepared to pay money for your app and probably pay again for the next major update or release. Nerds like us notice notice the little things like personalised error messages or on-boarding tutorials and we’ll return the favour by evangelising about your app to anyone who’ll listen. That’s free marketing, right there.

A lot of the time, it’s free! Of course, if you hire a copywriter it will cost money (and as a copywriter, I’d recommend it), but places like the release notes you can find in the Updates tab of the App Store don’t charge extra when you write something nice.

Are you convinced yet? Good. Now, let’s get down to the business of writing great release notes. Here are a few of the worst, the most average and the best examples I’ve seen in my own App Store updates recently.

Note: If you’re reading this on a smartphone, the images below might not be big enough for you to read, so I’d recommend switching to a larger device. I fully realise and apologise for the irony of this. 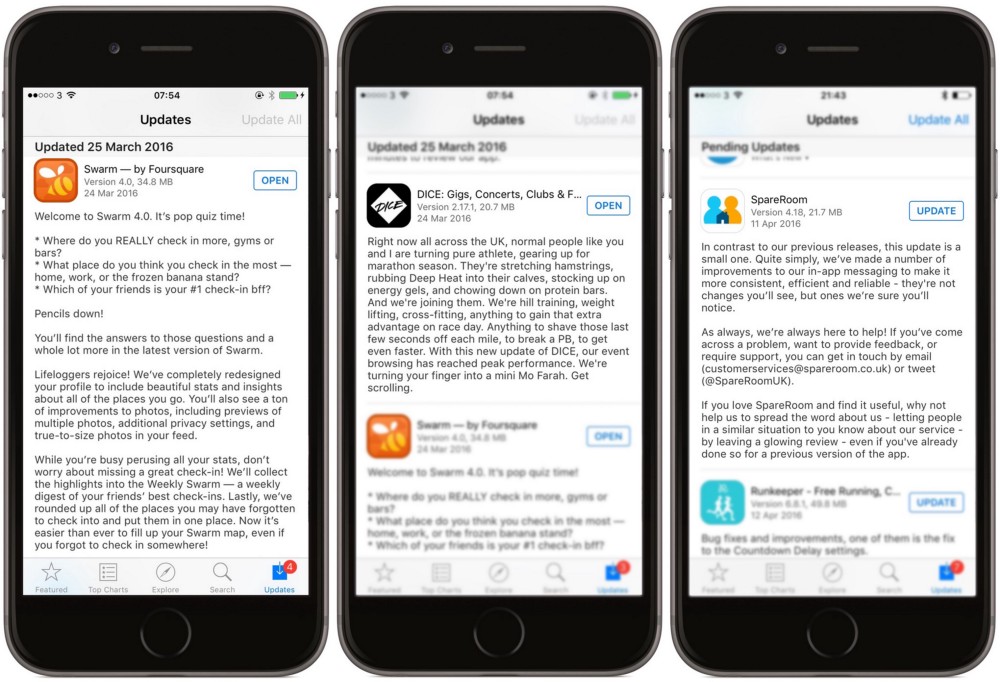 Above are some of the best release notes I’ve noticed recently. Before you say it, I know these are all from relatively big developers (Swarm being the biggest, here), but as we’ll see later on, release notes from big developers are a real mixed bag. And they’re where you, you brilliant indie dev, can differenciate yourself.

What makes these so great? A few things:

Their length and detail is appropriate for the update. Swarm’s 4.0 release completely redesigned profile pages, so obviously it warrants talking about. If you’re overhauling a major section of the app, you owe it to yourself (or your developers) to give it some love when it comes to the release notes. On the other hand, DICE have far less to talk about (they’ve improved browsing speeds within the app), so things are a little shorter, but they’ve still found a way to make things interesting.

They’re written by humans, for humans. When you’re writing commit messages for Git, it’s easy to let that straight-to-the-point, technical style of writing find its way into everything else. These three examples do a great job of communicating in a way that’s human. Remember what I said earlier about explaining your app to a stranger? It’s much the same here — explain your updates like you’re talking them through with a (non–technical) friend.

They know their audiences. Each set of release notes has a slightly different tone, and that’s okay. DICE went for comedy, SpareRoom played it straight. Both work perfectly because it’s a tone that’s tailored to their audience. It makes sense that SpareRoom — effectively a utility and service app — keeps their updates to the point and friendly, while DICE—an app designed to revolutionise the leisure industries—goes for something a little more entertaining. Your app likely started with the aim of solving a problem for a specific audience, why shouldn’t your copy do the same? 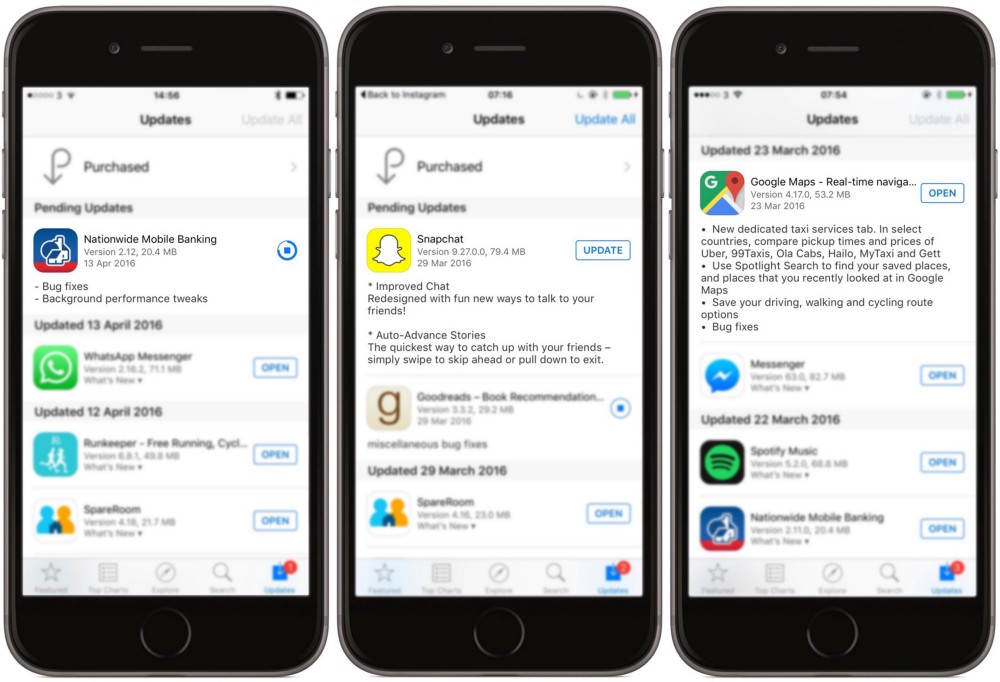 They don’t sell the benefit. While you might not really be shooting for sales in the Updates tab (after all, these people have already downloaded your app if they’re updating it), there’s still no excuse not to be selling the benefits of your updates. By that, I mean explaining what “bug fixes” or “background performance tweaks” actually mean for the user. Will your app run faster as a result? Have you fixed a common crash? Great! Tell me about it. This is the perfect opportunity to show that you’re not out to make a quick buck and care about making meaninful updates to your app that actually benefit your users.

They’re vague. Snapchat’s “Redesigned with new fun ways to talk to your friends!” line is a good example of a vague benefit. People love specifics. Does this mean I can send more emojis? Does this mean it’s easier to take a selfie? Tell me what those new fun ways are and I’ll be far more likely to open your app and engage with it than discard it as another invisible update. You like active users, right?

They lack personality. Google Maps’ release notes aren’t terrible, they’re just missing an opportunity to show off the brand’s personality. We know it exists, so why can’t it exist here? Sure, if you’re making an update that fixes that bug that accidentally double–charged everyone for an in–app purchase, keep it humour–less and apologetic, but if you’re doing great things, be happy about it! 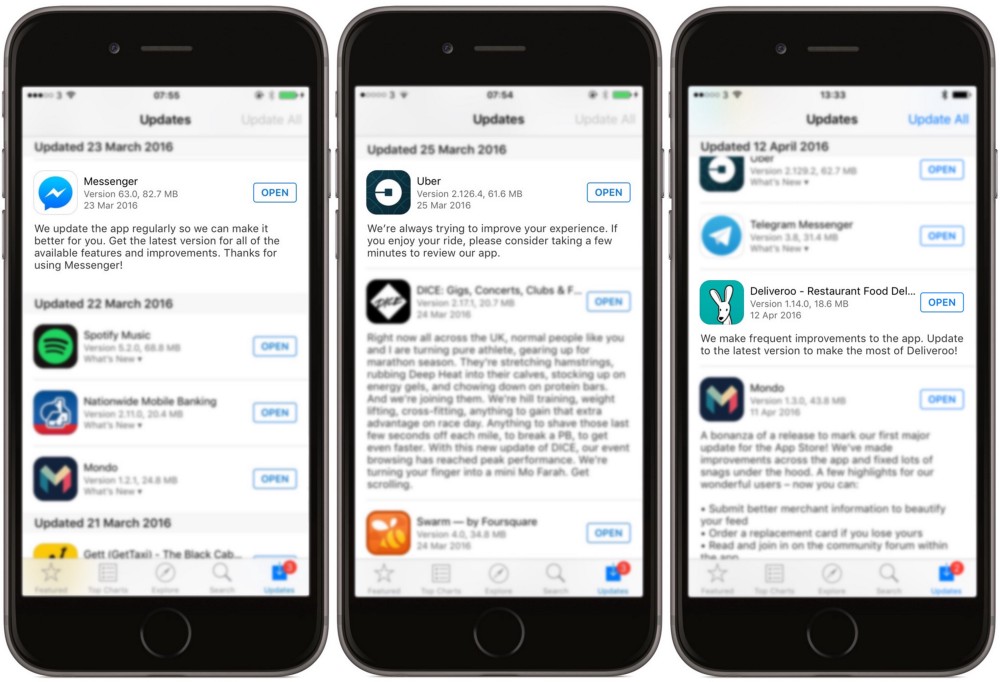 Okay, let’s keep this short. Don’t state the obvious. I know you “make frequent updates to the app” because you’re in my updates tab every week with the same terrible message. Of course I’m going to “get the latest version” because automatic updates are a thing. You are telling me nothing helpful here. Nothing at all. All you’re telling me is that you’re lazy when it comes to communicating with your users.

If you’re still not sure what’s wrong with this last batch of examples, please re–read this article until you do. I promise it’ll make sense sooner or later.

But does anyone even read these?

That’s a very good question! Not as many people read these since Apple made automatic updates a thing, but some people still do, is my answer. The thing is, it doesn’t matter whether four, 40 or 40,000 people read your release notes. The people that do are the people that judge you on your attention to detail, after all, they’re interested in the fine details of your point update. Please them with appropriately detailed, entertaining and useful release notes and you’ll turn a user into a fan. I’m sure of it.

Likewise, I know that automatic updates have meant that the importance of the Updates tab has really taken a hit. But I see it as a different opportunity now. You might need to rely on an in–app method for explaining new features to users, but you can use the updates tab to show them that you care about every aspect of the experience your app gives. Who isn’t going to love that?

This piece was originally posted on Medium.